With autumn in full swing the weather gods were very kind to us and gave us a beautiful warm morning to play rugby.

We had set out our pitch to play on the 1st XV pitch right in front of the clubhouse and had gathered a decent crowd to watch the teams. Last year we had some great games with Whitstable and keenly looked forward to this fixture as they always test us and we wanted to see how the development of the boys was shaping.

It was agreed we would play two halves of 25 minutes each.

We had Clive Lewis guesting as a very experienced referee today giving all the coaches the opportunity to concentrate on the lads, and I’ll be the first to say thank you to Clive as he controlled the game perfecting and really helped us out.

We had picked a side today based on performances so far in the previous games and at training. Also in our decision making process was attendance, attitude, effort, desire and skills. The 13 boys that started were being pushed hard by the other lads wanting to be on the pitch and making it a real on-going competition for places in the team.

By kick off we had a squad of 20 with Luca Arizina being committed elsewhere and Ollie Jordan-Smith having picked up an injury. From the start we played a very pressing style of rugby putting pressure on Whitstable’s defence and not long into the game this paid off when good work from the team released Henry Carruthers and he ran in his first try to give us a well deserved lead.

Whitstable hit back with some quick passing and good work down the wing to equalise. We had spoken about the ‘reaction’ from negative things happening in the game and we got this from our boys. Theo Rowe was captaining the side and dictating play fantastically. Jack Brewer, Max Anderson and Henry Mason we’re working incredibly hard to play and win the ball throughout. Zach Ralph and Vinnie Perkins, making his debut, were immense. Oscar Andrews had started brightly and just after Whitstable had scored made a huge tackle out on the wing to stop them running through, preventing a probable try. Unfortunately Oscar took a knock and had to come off for a while, although he returned later, but he really showed with that tackle he was prepared to put himself on the line for the team.

Thanet continued to look strong with some good interpassing play from Finley Hickmott, Fred O’Halloran and Gil Smith which resulted in releasing Henry Carruthers for his second try. The lead did not last long however as from an excellent kick forward by Whitstable their flying winger made good ground and took the ball on the bounce to score and once again bring the sides level.

With half time looming Thanet continued to look strong and had several chances to score through Vinnie and others and then with virtually the last play of the half some brilliant work from the fast hands of Charlie Pantelli and further good work from Owen Read allowed Henry Carruthers to make another strong run that ended with him scoring his hat trick of tries and giving Thanet the lead going into the half time whistle.

The Coaches spoke to the lads at the break and said we were really pleased with their performance so far but would ask for more, and for them to take responsibility for the team’s performance in the second half.

Once the second half started it was clear our lads had the bit between their teeth and they showed great desire and determination to further extend the lead to 4-2 when Toby Hunt finished well after good work again from Zach,Max and Owen. The lead was added to when Henry Carruthers got another on the score sheet with his 4th and the team’s 5th try.
Although we were playing very well, Whitstable were still well in the game and dangerous on the break, but particularly in the wide areas, and this proved to be the case when they ran in another try to peg the score back to 5-3.
Shaheer Khan and Harvey Stocker were introduced and gave further energy and power to the team that resulted in a debut game try for Vinnie, who had been threatening to score one on a couple of previous attempts. Whitstable not to be outdone, kept in the game and bought the score back to 6-4 and showed what a great side they are too.

Wanderers from this point on introduced our remaining players with Myles Wise, Josh Matteson, Harry Kirkpatrick and Owen Evens coming on to give us fresh legs and to show what strength in depth we have with our squad. The new players immediately complimented the other lads and this was soon evident when some great team play ended with Zach scoring a well deserved try to give us a little cushion with the score at 7-4..

The fitness of the lads really paid off now in the closing part of the game as we got stronger and Toby Hunt on two occasions capitalised on a few missed tackles and hit the ball at speed to run in two great individual tries to put us into a 9-4 lead that lasted till the final whistle.

The Under 13s had been asked for a great performance as a team and for their individual battles and they all rose up for this challenge and gave us what we had asked for and more. The team was the real winner today, not with the score line but the performance.

As individuals go on the team, they were all great but to highlight some, Henry Carruthers, Vinnie Perkins and Toby Hunt for your power and try’s, Theo for dictating the plays of the game but for an overall performance that had, tacking, running, support, hard work, great hands and a try too, our player of the week goes to Zach Ralph, well done Zach.

A thank you to Whitstable’s players, coaches and parents who made the morning’s rugby a great advert for what a brilliant sport it is and created a fantastic atmosphere.

More hard work and development is to come from training and future games, but to enjoy the moment today and well done to all the boys. 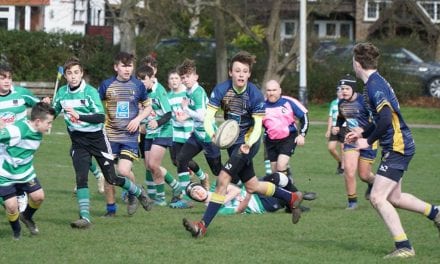